Obstetrics and Gynecology Blog/Guidance and support all ages. 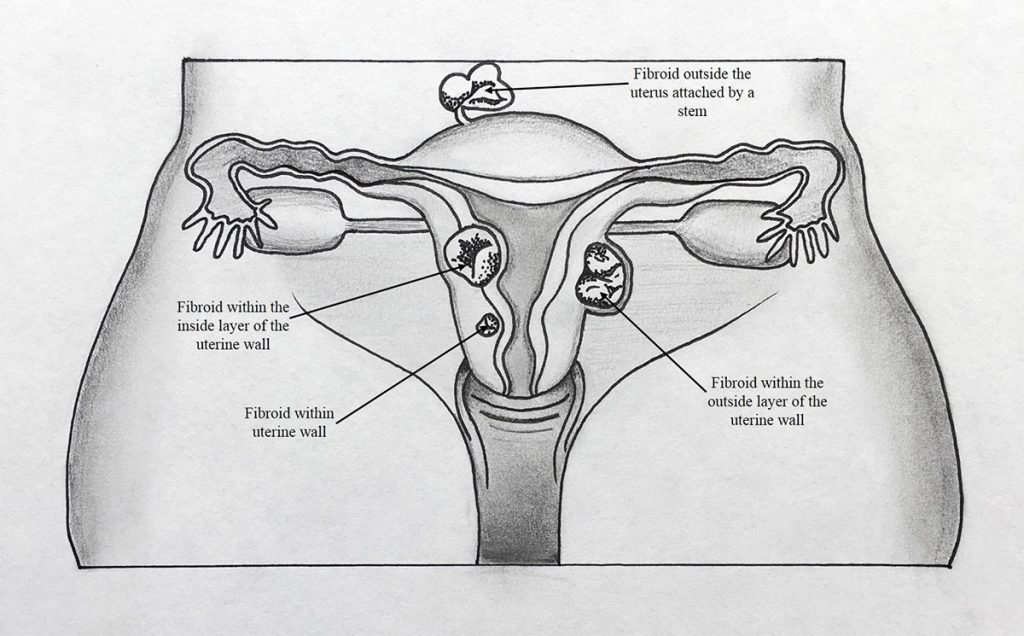 Uterine fibroids are benign (non-cancerous) tumors that grow from the wall or smooth muscle fibers of the uterus. They are actually clones, each cell is a copy of itself — meaning that each individual fibroid has arisen from a single smooth muscle cell. No one knows exactly what causes one smooth muscle cell to start growing uncontrollably, although research is starting to identify some of the molecules that are important in regulating growth.

Fibroids are extremely common among women all over the world. They are the most common gynecologic tumor. Seventy-to-eighty percent of women have them, however, only 25 – 30 percent of those will have any symptoms. Fibroids can be microscopic or huge. The largest known weighed 70 pounds.

Their growth rate is variable even when one woman has many tumors. Some tumors enlarge, some stay stable in size and others regress- all in the same uterus. Fibroids tend to start growing in women 30-40 years old. Almost all fibroids shrink after menopause.

Symptoms occur due to the location, size, and changes in pregnancy status. Pain and pressure symptoms and bleeding are the most common. Large fibroids can push on the bladder and bowel causing urinary frequency or difficulty with bowel movements. Pain with movement or intercourse can also occur with fibroids.

Bleeding occurs in 30-50 percent of symptomatic women and is the number one issue that brings women to seek care. Fibroids can cause extremely heavy and prolonged periods but can also cause bleeding in between menses. Very small fibroids (1-2 cm) can cause symptoms if the fibroid is in a critical place, pushing into the cavity of the uterus. Occasionally fibroids within the cavity of the uterus cause problems such as infertility or miscarriage.

Most fibroids are small, not bothersome and do not require treatment.

In our next blog, we’ll discuss treatment options for symptomatic fibroids.

« Back to Obstetrics and Gynecology Blog